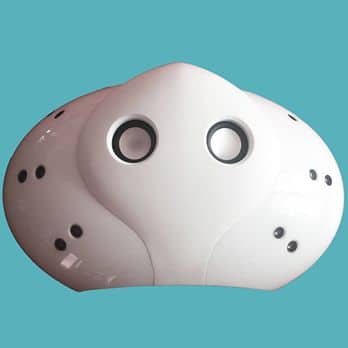 « The best interactive music system. Share the composition with the audience! »

When he was very young, he made improbable synthesizers with the family's television. By electrocuting himself, he made born the spark of creation : He would be a music composer! Rebellious teenager, he was the guitarist for the confidential punk rock band: Nanaenko, 2 american girls with french boys. This experience led him to develop his own band: me, myself and my machines. Thus it was among the first to work with drum machines and computers in the 80’s. With its transistorized band, he made many contemporary music for the museum Georges Pompidou Center. A few years passed in perpetual search of new concepts that stuck with exhibitions or music albums produced by the Pompidou Center. In 1989, for the bicentennial of the French Revolution, he was commissioned to compose musics in classical style. He took up the challenge and plunged several months in treatises on harmony, counterpoint and orchestration. During this time, he met Patrice Mondon, musician at the Opera with whom he still works today. Meanwhile, he composed some music for advertising, TV and skins generic chain. During the 90’s, he created a recording studio with vintage components and worked for french rock bands and entertainers. The learning of Indian music gave him back the pleasure of doing acoustic music. Now, he practice more than 50 different instruments, from santur to cello, and not forgetting the electric guitar and piano. It leverages these new passions to compose original music for more than 60 french Tv documentaries.