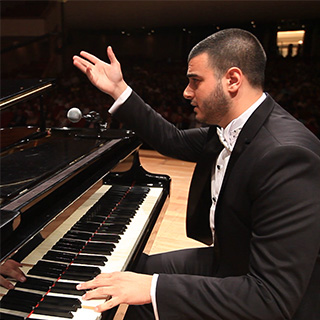 Anthony FAYAD was born in Lebanon in 1991. He received his diploma in piano performance with an excellent grade from Antonine University, school of music, under the guidance of Mrs. Suzanne KETCHEK. He participated in many conferences and masterclasses with native and foreign instructors; Mr. Vassilis VARVARESOS from Greece, Mr. Marat Gubaidillin from Russia, Mr. Armen KETCHEK from Armenia, Mr. Salavtore SCHINALDI and Mr. Michele CAMPANELLA from Italy, and many others. He also participated in many concerts; performed with multiple choirs and solo singers throughout his educational and professional years. He learned composition with the founder of Antonine music school, Father Joseph WAKED. His background in classical music had an impact on his passion for film music. This combination influenced his composing character. He started composing music for hymns, short movies and commercial songs. His Master’s degree in MULTIMEDIA engineering, also from Antonine University, enhanced his skills in digital music production. Currently, Anthony is an instructor at Antonine University - faculty of engineering and a piano teacher at Antonine music school. He works on projects related to music and engineering with many universities and companies; Lebanese American University, Antonine University, Image Production House and many others. He performed, with an orchestra, his own compositions in a Piano Concerto that was held at UNESCO Palace on June 19th, 2015. This put him in the front seats of young composers.